Some long range, some called..

Ben and Gus went to my brother’s place after calling behind our house where Gus made the running headshot on his coyote. As they pulled in, they saw a coyote on the pivot. A stalk put them at 710 yards with nothing but a bare alfalfa field between them and the coyote. Ben ranged, dialed and put one in the midsection with a wind that was heavier than he expected, but it went down quickly. When they got to the coyote, they spotted another that Gus hit at 370. (A mile and a half blood trail never turned the coyote up.) But, as they were looking at the area of Gus’s hit they turned to find yet a third coyote on the pivot! This one was ranged at 730 yards. At the shot, the coyote just stiffened and tipped over!

It got dark on them while tracking Gus’ coyote so they went back in the morning but ran out of snow and had to give it up. They found a good stand near where they quit tracking and called. A coyote came hard on Ben’s side but turned just out of shotgun range. Ben switched to his rifle and, not to be outdone by his cousin, put a running headshot of his own on it! On their last stand, one more coyote backdoored them in the only place he could have got it done and made it out with his skin.

Overall, a pretty good couple of days for Team NOS.

Happy New Year from No Off Season! 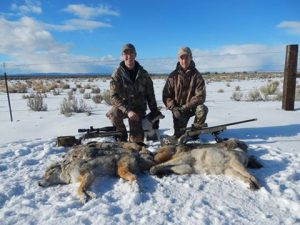