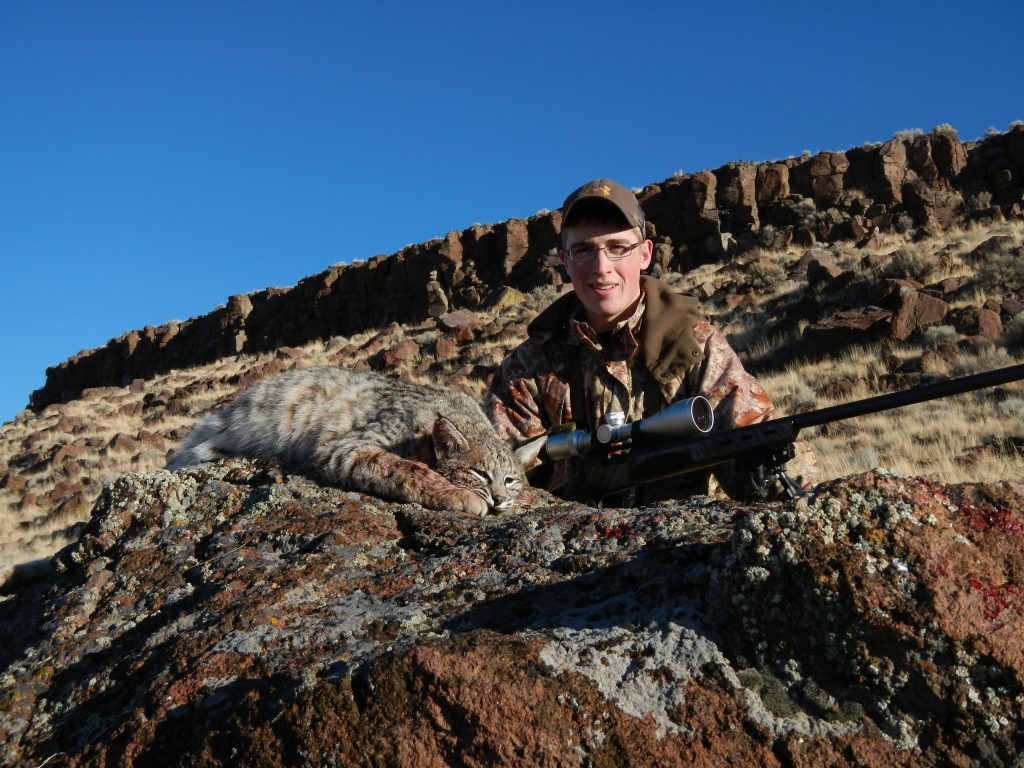 Here’s the hero shot.  (Red arrow shows the location of the rockchuck.)

And, now the story.

It’s getting close to the time our rockchucks will be going down for the year so I wanted to make a hunt this week.  My youngest son, Ben, has held the family record for the longest rockchuck shot.   He took one this spring at around 1100 yards.   But, since Ben was out of town visiting his brother, I asked my nephew, Gus, if he wanted to go along.  Gus was game so we headed out to try to get to a promising looking canyon I’d seen while hunting the previous week.  The road was horrible but we eventually made it to within a short hike of the canyon.

The canyon was wider than I had imagined.  It turned out to be a little over 800 yards across.  We set up on the rim and began glassing.  Eventually I spotted a couple of rockchucks beyond the far rim of the canyon standing up in the grass.  They offered good shots but poor spotting.  Gus ranged the area with his Leica 1200 at around 1250 yards.  He only had ten rounds of ammo for his .308 with him.  He told me that the previous two rounds from his .308 had scored on two sage rats and one bear and he wanted to keep his string going.  I suggested that if that was the case, he probably wouldn’t want to start shooting at 1200 yard rockchucks.  But, being the sensible young man that he is, he decided he might as well take a poke at them anyway.

Gus had not shot this particular load past 500 yards.  The longest kill he’d made with the gun previously was around 550 yards on a prairie dog on our Wyoming trip two summers ago.  With no drop chart we just discussed things and took a guess based on the drops for my rifle and adding more for the rainbow trajectory of the big 175 grain SMK.  I told him to dial in 48 minutes of angle elevation and five MOA of wind.  It didn’t  instill a lot of confidence in him concerning our dope when I told him I hoped I could see his shot in the field of view of my spotting scope!

Gus shoots a Remington 700 SPS in a B&C stock (I think) with a Leupold Mark 4 4.5-14X scope.  It definitely wasn’t too much magnification for the situation!  He told me later that the horizontal crosshair was covering the whole ‘chuck.  He dialed up, settled behind the rifle and squeezed off the shot.  I was actually able to call the cold-bore shot.  It was within about one minute on windage and several feet low.  I told him to take one minute of wind out and come up another six MOA.  That got us in the ball park on the next shot and he ended up with 58 1/4 minutes of elevation in the scope and three minutes of wind.  For reference, that elevation equates to over 60 feet of holdover at that range!

The shots from that point on were all very close.  He was close enough that he was scaring the rockchucks off with each shot.  We’d then have to wait to find another in a position where I could spot the shot before he could loose another round.  Long story short, on round number seven I saw no dust and the rockchuck took off like a scalded cat across the rocks and onto an angled face of a ledge where it launched itself into the air off a 40 foot cliff!  We could see it wasn’t running correctly but didn’t know whether Gus had just hit it in the leg or what.  He felt good enough about it to want to go check.  I on the other hand wasn’t nearly as excited.

One challenge of long range shooting is the retrieval.  This ‘chuck was a long ways away and across the canyon.  Because of the rimrock, I didn’t know how far we’d have to go just to get to the bottom of the canyon which also happened to have a good sized stream running through it.  But, being the good uncle I am, I went along.  It took us over a half mile and an encounter with one very large rattle snake to get to a spot we could descend into the canyon.  When we got to the stream, the run-off made it more like a small river and that was where the whole Good Uncle thing gave out!

Gus stripped down to his skivvies and carried his pants and shoes across the swollen creek.  I didn’t know if he was going to be able to stay upright in the current but he’s shaped like Gumby so he doesn’t displace lot of water.  He made it out, got dressed and headed up the other side of the canyon.  I watched through the spotting scope as he approached the bottom of the bluff.  A minute or so later he was holding up his 1264 yard rockchuck!  The shot turned out to be a centermass hit with close to a one inch exit.  The rockchuck was dead before he hit the ground.

It took nearly three hours to get to the ‘chuck and make it back to our shooting location where we finished the “photo shoot”.   Gus took several readings with his range finder.  The average turned out to be 1264 yards.

Gus was really looking forward to rubbing his new record in his cousin’s face.  Ben had pretty well stopped reaching out past about 1100 yards thinking his family record was safe.  I can already envision Ben’s drive to move beyond 1264 yards.  He’s got his work cut out for him but somehow I think he’s up to the task!

I never fired a shot but it was good day with a good kid and one exceptional shot.